As they wait for aid from Washington, Arkansas farmers are already looking ahead to other markets where they can sell their soybeans now that the Chinese market has been complicated by a hefty new tariff.

Brad Doyle, who grows soybeans in Weiner, said the $12 billion in planned aid from the federal government to help farmers recoup some of their losses from the ongoing trade war is welcomed news, but Arkansas’s farmers will still need to seek out additional markets to replace China, which was the largest buyer of American soybeans prior to the current trade war.

“Although we would prefer a longer-term trade solution, this [the aid] may allow some farmers to stay in business,” said Doyle.

The $12 billion aid package includes direct payments to farmers affected by the trade war, a promise that the government will purchase food from farms to distribute to food banks and help in establishing other markets.

Doyle expects farmers to look to Japan, Indonesia and other countries to help replace the Chinese market.

“Tariffs are the greatest!” tweeted President Trump.  Trump has repeatedly said that the U.S. has been taken advantage of by other countries for many years with high tariffs and unfair trade policies, and is just now standing up for itself. 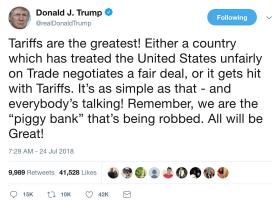 Joshua Sewell, a senior policy analyst with the Washington-based Taxpayers for Common Sense, said the billions of dollars in bailout funding from the government sets an unwise precedent.

“What we can’t do is simply write checks from the Treasury to take care of something that we caused with our other hand,” he said.

In Arkansas, soybean prices have fallen 20 percent from $10 a bushel to $8 amid the trade dispute.