Dirk DeTurck sits in a rocker on the front porch of his rural Conway home, nervously smoking a cigarette. The retired native New Yorker and U.S. military veteran says his neighborhood, filled with petroleum field workers, is not where he intended to settle when he moved to Arkansas. He gazes north towards the Ozark foothills. In 2004 that's where he built his 5,000 square-foot dream homestead on six acres perched atop a mountain ridge in between the towns of Guy and Greenbrier in Faulkner County. 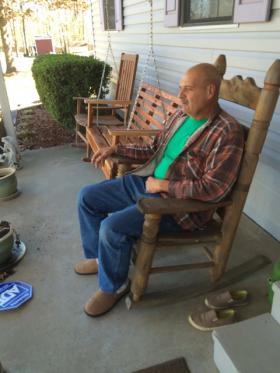 "We bought a beautiful place on a dead-end road with 1,200 acres behind us with nothing on it."

Four years later, bulldozers showed up. His neighbor, who owned the 1,200 acres behind DeTurck's house, had leased his mineral rights to Chesapeake Energy Corporation, a natural gas exploration company.

A forest of massive drill rigs sprang up behind DeTurck's house, drilling vertical shafts, some thousands of feet deep, followed by multiple horizontal bores, like spokes on a wheel. Millions of gallons of water and tons of lubricating chemicals were shot through the horizontal channels, cracking the underground shale, releasing pockets of methane gas. The new technology was called slickwater hydraulic fracturing, or fracking. 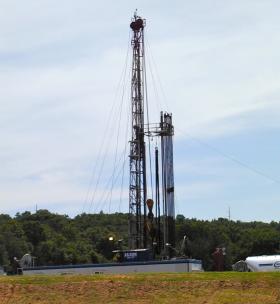 DeTurck's homestead was in the middle of the burgeoning Fayetteville Shale gas play.

"The drilling rigs created horrible smells, constant noise, and lighting," he says.  "It was like a stadium, just 1,500 feet from our back door."

DeTurck says the flares and fumes from a half dozen wells out back caused he and his family constant headaches and unexplained rashes. He says his tongue inexplicably bled. He couldn't go outside. His garden wilted from neglect. All the wildlife disappeared. The few critters that did show up to his feeder, he says appeared sickly, missing fur or feathers. Some looked like they had tumors.

“It was horrible!" Deturck says. "We didn’t sleep, we didn’t know if the whole house was coming down. My wife was taking motion sickness pills. In the house! Because it felt like you were out at sea.” 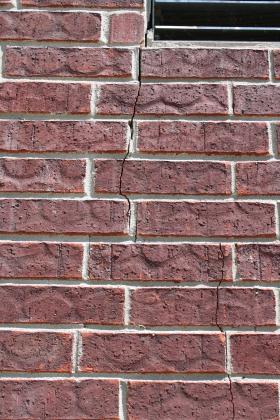 DeTurck complained to county lawmakers. They told him to move. Knowing it would be impossible to sell his place, DeTurck fought back.

He organized with other affected landowners taking their complaints to state lawmakers and USGS officials. Residents were told the earthquakes were naturally occurring. DeTurck began to log each quake comparing his data to USGS seismicity posted online. He discovered the quakes coincided with fracking activity.

"The first one felt like a sonic boom," he says. "The air moved in my face. I thought, 'What was that?!' Then the house started shaking, all the time.

In the winter of 2011 a magnitude 4.7 quake cracked his foundation. One neighbor's cinder-block house broke in half. Other neighbors and businesses reported bricks falling off their homes, windows breaking, stuff falling off shelves. He says thankfully, no one was injured. 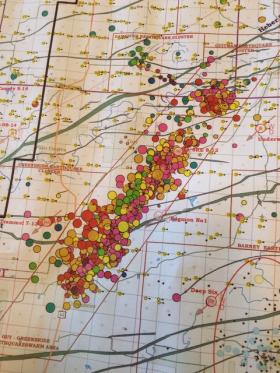 By then,  Arkansas scientists had started to link earthquakes to frack wastewater injected into underground disposal wells. Millions of gallons of frack wastewater were disturbing an ancient eight-mile long fault, eight miles beneath Faulkner County. Concerns about a large damaging earthquake led the Arkansas Oil and Gas Commission to issue a moratorium on wastewater deposal in the seismic zone, the first industry mandate of its kind.

It was followed by an all-out ban.

The quakes eased by summer. DeTurck sold his half-million dollar dream home, taking a financial loss. He wanted out. He advised the buyer of the risks. By then the wildlife was returning. The air smelled good. Things were quiet, he says. The U.S. petroleum market was glutted with natural gas and the Fayetteville Shale play was shutting down. All told 5,842 gas wells had been drilled, along with 23 wastewater disposal wells, although today, the Arkansas Oil and Gas Commission reports that most industrial fracturing fluids in Arkansas are recycled and reused.

In late 2011, Arkansas was shaken again, this time by a 5.7 earthquake. The epicenter, however, was in Prague, Oklahoma, a state where, at the time, more than 180,000 conventional and newly fracked wells were producing both crude oil and natural gas. But Oklahoma's petroleum reserves, unlike the Fayetteville Shale, are "wet," pumping out billions of gallons of brackish waste water, which the industry injects thousands of feet underground into hundreds of disposal wells.

But all that water was disturbing ancient faults beneath Oklahoma, causing the state to shiver with thousands of small earthquakes.

“I felt that earthquake," says Arkansas geologist Scott Ausbrooks.  "Reports of Arkansas power outages came out of Marion County. Equipment was knocked over near Harrison. [The shaking] was reported as far east as downtown Little Rock, felt in the taller buildings.” 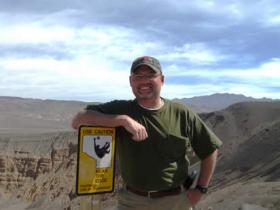 Ausbrooks lives in Greenbrier, Arkansas, the heart of the Fayetteville Shale. When the quakes there started up, he says it was a novelty.

"But three, four magnitude-3 events a day became a nuisance," he says. "And when the 4.7 quake occurred in Arkansas? That was a nightmare."

Scott Ausbrooks, who serves as Assistant Director and Assistant State Geologist for the Arkansas Geological Survey in Little Rock, has become a frack quake expert, helping Arkansas and Oklahoma regulators to deal with industry-induced seismicity.

"Ours was a relatively small area compared to what Oklahoma is dealing with. In theory we could have had a large damaging earthquake, but shutting down certain injection wells changed that outcome." 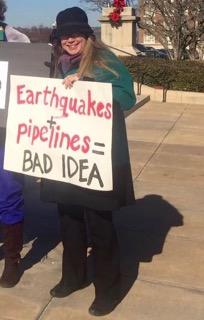 That rattles Hot Springs resident Denise Parkinson. She's campaigning to block construction of the Diamond Pipeline, a new 440-mile long crude oil pipeline originating in Cushing, crossing north central Arkansas and terminating at a Valero processing facility in Memphis. As ammunition, Parkinson pulls out a letter issued by EPA Region 6 late last year to Oklahoma regulators. The letter warns that an earthquake exceeding magnitude 5.7 at Cushing, which has an 80 million barrel oil storage capacity, would cause a breach that "could be catastrophic for both the environment and the national energy system."

“This will be a disaster of biblical proportions," Denise Parkinson says. "If you grew up in Arkansas, like I did, and attended church, like I did, and heard about the lake of fire in 'Revelations'? That is what I am talking about. That’s what’s at stake.”

Oklahoma has been in the oil business for well over a century. The horizontal hydraulic fracturing revolution, however, is spurring both the production of even more oil and natural gas--and seismicity.

Daniel McNamara, a USGS geophysicist who researches and maps industry-induced earthquakes across the country, characterizes Oklahoma’s swarm as, “unheard of.”  In 2015, he predicted that the thousands of small tremors could reactive underground faults, producing larger future events. 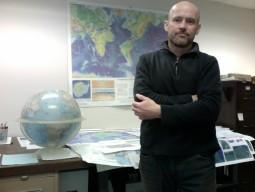 “Yeah,” McNamara says. “In 2016 there were three earthquakes larger or equal to magnitude 5, one occurring in the Cushing region, a region we are concerned about.”

Because of the regulatory oversight being conducted by the Oklahoma Corporation Commission Oil and Gas Conservation Division to limit wastewater disposal volumes in a 15,000-square mile seismic area of Oklahoma, quakes are subsiding, says Daniel McNamara.

“But I want to make it clear that the hazard is extremely elevated compared to 10 years ago, although quakes are decreasing from 2016 to 17.”

Last year the oil and gas industry disposed of more than a billion barrels of wastewater, he says. Less than five percent of the disposed water is from drilling and fracking, experts say. Most is a waste product of active oil and gas well production. Currently the OCC has shut in 80 disposal wells completely in a seismically-sensitive region.

“The latest earthquake rates for the last nine months have been in a very steady decline," Skinner says. "And all we can say at this point is that we are headed in the right direction. And we also have tools, resources and people we didn’t have a year ago.”

Oklahoma’s Geological Survey director Jeremy Boak has been attempting to wrangle induced earthquakes. The challenge, he says, is that the faults don't react predictably to wastewater disposal.

“So I’m as worried about a plus magnitude 5.o occurring somewhere else in Oklahoma as I am in the Cushing area,” he says. “The overall rate [of quakes] is declining rapidly but I won’t rule out larger quakes. Although the more the rates decline, the less likely that is to happen.” 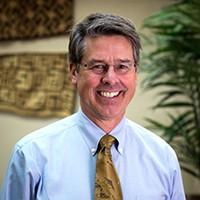 The directive states that, “The continued drop in earthquakes, as well as new data and input from the Oklahoma Geological Survey have caused a change in our orientation from focusing on current disposal volumes within the AOI — earthquake “Area of Interest”— to looking ahead to try and ensure there isn’t a sudden, surprise jump in those disposal volumes.”

Under the directive, operators will be allowed, on a limited basis and based on seismic date, to increase volumes in certain wells and, if necessary, offset that with lower volumes in other wells.

In early March, the U.S. Geological Survey issued its annual potential ground-shaking hazards forecast which now includes, for the second year in a row, human-induced earthquake activity, in the central and eastern U.S.

The forecast says the chances of damage from future large man-made quakes are expected to fluctuate--depending upon industry and policy practices. 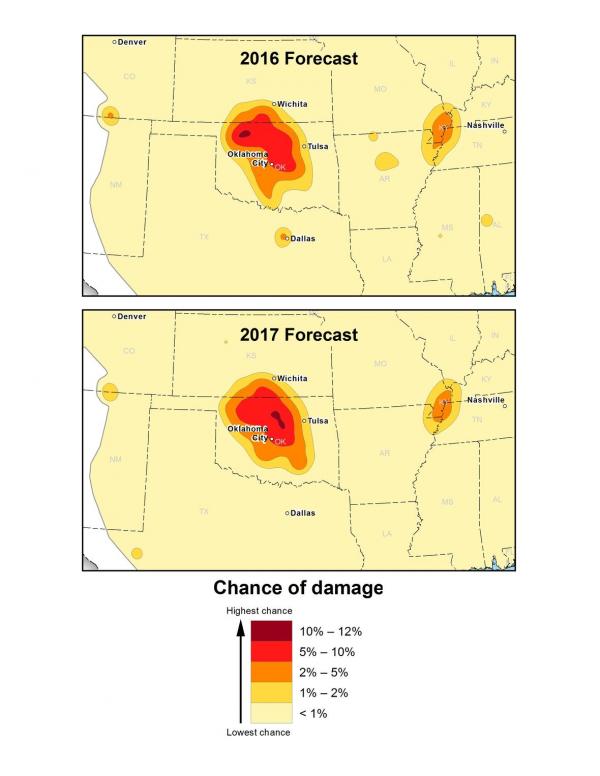