Patients awaiting Arkansas's first-in-the-Bible-Belt medical marijuana program will have to demonstrate that other kind of patience.

The agency administering the program has announced that no licenses will be granted this year or perhaps even early next year.

The application period closed Sept. 18 with a surprise, says the Department of Finance and Administration’s Scott Hardin.

"I think going into that last day Sept. 18 we were at approximately a hundred applications, and then on that final day we received 230 applications. I think at that point everyone realized that there was just no way that this was going to be a quick process, when you're dealing with applications that range from 400 pages on the small side to 3,000 pages on the larger end." 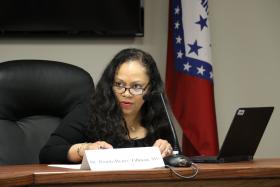 The Medical Marijuana Commission, a board comprised of five political appointees, is charged with scoring the applicants according to a predetermined rubric, but before it can get to that the agency is fact checking each of the applications, then "depersonalizing" them — redacting all information that would identify the person behind the application.

The commission won't even receive applications before Dec. 15, they were told at a regular meeting Oct. 16. The first batch will be the 95 seeking a commercial marijuana cultivation license. Then the agency will direct its efforts to the remaining roughly 230 applications for dispensary (retail) licenses.

Earlier, the commission voted to license 32 dispensers and only five cultivators, and to spread those out across eight geographic regions in the state.

"Here it is almost November and they [the commissioners] haven't even got their hands on the paperwork yet," Melissa Fults said.

Fults is a long-time patient and marijuana advocate who directed last year’s Issue 7, a competing medical marijuana ballot proposal the state Supreme Court pulled days before the election, leaving the Medical Marijuana Amendment (Issue 6) the only option. She is not an applicant.

"From what I'm told even the marijuana commission was throwing a fit because they're trying to get it up and going and their hands are tied right now.

"They're talking about it may be as late as April before they [the licenses] are awarded, which means it's going to be the end of next summer before patients get their medicine!"

What this means for many cancer and pain sufferers who would avail themselves of legal medical marijuana, Fults said, is they’ll have to go without, perhaps continuing on analgesics like opioids, or continue getting their cannabis from dealers.

But the rollout of marijuana programs in other states have brought lawsuits, Department of Finance and Administration lawyer Joel DiPippa has said, and marijuana is still prohibited by federal law.

In order to do this responsibly, Hardin says, the division's three lawyers and ten agency staff working to fact-check the applicants for tax issues and residency requirements must be allowed to proceed diligently.

CORRECTION: A previous version of this story incorrectly stated the number of applications received on Sept. 18.