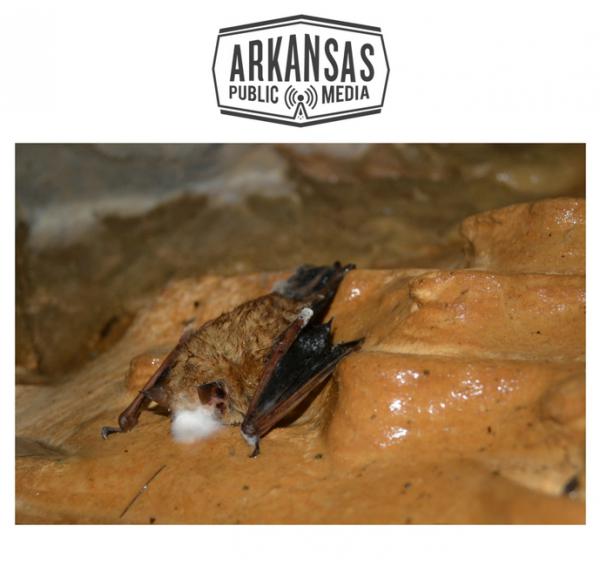 A fungus called white-nose syndrome has killed millions of cave-dwelling bats in the eastern U.S. and Canada and is now aggressively spreading across the South, including the karst-rich Ozarks and its abundant caves.

The irritating white, feathery fungus grows on the warm snouts and wings of hibernating bats, rousing them from winter torpor. Infected bats often flutter, disoriented, out of  protective caves where they may freeze or starve to death.

A federal task force which formed in 2011 to track and manage the epidemic is finally starting to see a glimmer of light at the end of a long tunnel. 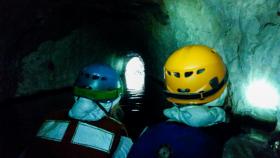 One tunnel where Southern bat scientists have been working for several years is the Black Diamond,  an abandoned partially collapsed 19th century railway passage in northeastern Georgia.

“And it gets absolutely no access, and at one time it was one of our largest hibernacula, or winter hibernation sites, for tricolored bats in the Southeast, with over 5,000 individuals.” 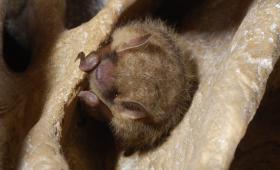 That thriving colony is now decimated by the fungus Pseudogymnoascus destructans first detected more than a decade ago in winter bat caves in New York. The bat disease is now spreading across the South, most recently in north Arkansas, Oklahoma and Texas.

“This fungus shows up and really shreds bat populations before we can have a chance to respond,” Pattavina says. 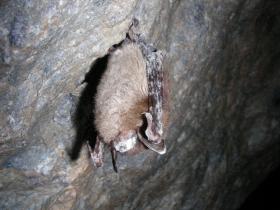 White-nose syndrome is transmitted bat to bat, or from primary contact with infected hibernacula. Experts speculate the fungal spores were carried into the U.S. on caving equipment used in Europe, where infected bat colonies appear immune to the disease.  The syndrome poses no threat to humans, pets or livestock. And initially, Pattavina says, scientists believed Southern bat colonies would be less affected due to warmer climate. But that’s not the case.

“It appears we have perfect conditions for the fungus to grow and invade the tissues of bats here," Pattavina says. "We have very similar declines, and we are at basement levels in many regions, especially in the Ozarks.”

Blake Sasse, a non-game mammal program leader for the Arkansas Game and Fish Commission, collaborates with U.S. Fish and Wildlife Service staff, providing the agency annual cave-dwelling bat surveillance data. He says the fungus is now confirmed in 13 Arkansas Ozark counties, as well as in two abandoned mines in the Ouachita Mountains in west central Arkansas.

Traces of the fungus were first discovered in Arkansas in 2012 on cave bats in Devil’s Den State Park in southwestern Washington County, as well as in a private cave in southern Baxter County. Several years previously, many national and state park caves in Arkansas had been closed as a precautionary measure. 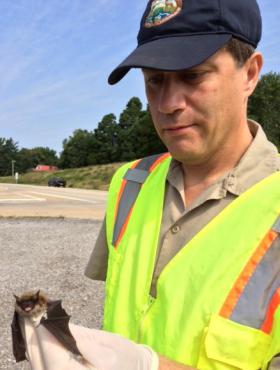 “Last winter we surveyed a little over 200 caves in the state, and we found white-nose syndrome in about half that contain regularly monitored bat populations," Sasse says.

“White-nose syndrome was first detected in Schoharie County, New York in 2006," he says, and has spread fairly rapidly from that time.”

Coleman says the disease is now confirmed in 31 states and detected in two more, including a new isolated outbreak in Washington state last year, which could begin to spread eastward, he says.

According to a 2011 report published in the journal Science, bats provide critical ecological services feasting on mosquitoes, moths, as well as agricultural and invasive pests, a service valued at more than $3.7 billion dollars. The article cites that a single colony of 150 big brown bats in Indiana can consume as many as 1.3 million pest insects in a single year.

Coleman says after the New York State Department of Environmental Conservation announced the presence of the fungus in 2007, federal, state, tribal officials and scientists mobilized a national response team a year later. By 2011, a national response plan had been deployed.

“Where we are focusing our efforts is basic and applied science, to understand how the disease works, and why certain bats are more susceptible,” Coleman says. 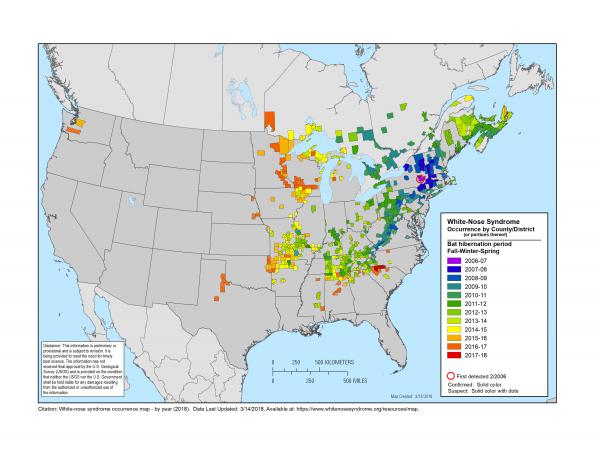 Pattavina says scientists are studying federal and state-owned caves in affected regions, now closed to the public. Recreational cavers, he says, and local conservationists are assisting with monitoring private caves.

“We have lots of people all over the ground,” Pattavina says, “providing swab data —private individuals, state, federal, park service, USGS, a coordinated effort throughout the U.S. and Canada.”

The fungus cannot be entirely eradicated, so scientists are experimenting with tweaking environmental conditions inside caves and test-fumigating winter bat hibernacula with fungicide to try to quell the spread of the disease.

“There’s a vaccine being researched right now,” Coleman says, “by U.S. Geological Survey with support from U.S. Fish and Wildlife Service, for field testing for applying this experimental vaccine to bats to improve their ability to survive in the presence of the fungus.”

More than half of all U.S. bat species hibernate in winter. Nine species have been confirmed with white-nose syndrome, including the endangered gray bat and Indiana bat.

Things were looking bleak for bats, until biologists in New York and Vermont recently discovered that 50 percent of marked little brown bats at several test sites appear to be surviving infection, a sign that recovery may be possible, Jeremy Coleman says.

“And so it would appear that these bats have something in them, or the way they behave, that allows them to survive in the presence of the fungus and also reproduce.”

Which is critical, given little brown bat populations at those infected sites have declined 90 percent. 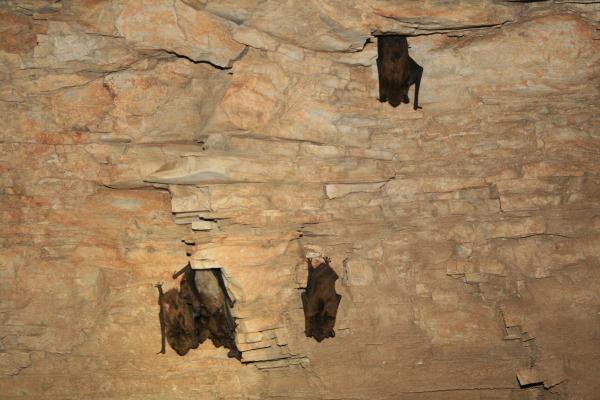 A multi-agency white-nose syndrome response team has yet to deploy biological treatments inside any wild Ozarks caves, Sasse says, preferring to work in controlled environments like mines and tunnels.

But Pete Pattavina says results from testing an aerosol fungicide, using a mosquito fogger strapped aboard a rowboat, on the tricolored bat population in the Black Diamond railway tunnel looks promising.

“It’s a proof-of-concept and a treatment, where we are trying to treat tricolored bats, which are very sensitive to rousing while in torpor, while they remain in hibernation.”

The passage has been fumigated six times over the past two years. As a result, the hibernating tricolored bat colony has slightly increased — by 15 percent last count — the first time since the disease outbreak occurred there in 2013.

Experiments with fungicide gels applied to single bats that communally groom are also being tried, which in theory may help to build resistance within colonies.

And last year, the National Fish and Wildlife Foundation in partnership with U.S. Fish and Wildlife Service and two corporate foundations issued a $1.3 million dollar grant to help prevent and slow the spread of the disease, including development of liquid probiotic hibernacula fumigants to reduce the severity of fungal infection.

Since 2008, the U.S. Fish and Wildlife Service alone has dedicated more than $40 million dollars to stop the spread of white-nose syndrome — for good reason. To date, Jeremy Coleman says, more than 6 million bats have died.

ARKANSAS PUBLIC MEDIA would like to thank to U.S. Fish and Wildlife agents Pete Pattavina and Shannon Vidal, as well as the Georgia Department of Natural Resources bat survey team for providing tunnel surveillance audio for this report.