The University of Arkansas Razorbacks (47-19) meet the Oregon State Beavers (53-11) Monday night in the finals of the College World Series.

The game, broadcast on ESPN and the Razorbacks Sports Network, begins at 6 p.m. barring weather delays. 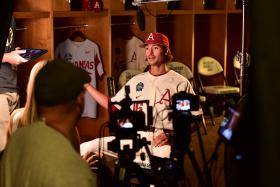 Arkansas comes in with a pitching staff that’s performing at its season best, with arms at full rest. The starter, Blaine Knight of Bryant, is 13-0 with an earned-run average below three.

Oregon State’s probable starter is Luke Heimlich (16-1), who has not made it through three full innings in Omaha, has allowed eight earned runs in two short starts in Omaha.

But while Arkansas is averaging better than eight runs a game in this College World Series, the Beavers are hitting .351 and averaging 13 runs a game.

It’s a three-game set — two out of three gets the trophy. 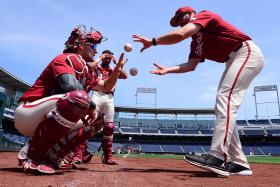 Razorback faithful are hoping the ballpark, with a capacity of 24,000, will feel like home field Baum Stadium. After all, it’s about 26 hours by car from Corvallis, Oregon, but just six from Fayetteville.

The last time the two teams played was 23 years ago.

It rained in Omaha Monday morning, and the National Weather Service is predicting more precipitation and potentially storms during the afternoon — the kind of weather that interrupted several games last week in Omaha.