In the autumn of 1965, on a 640-acre parcel near the tiny Ozarks community of Strickler, ground was broken on a secret nuclear fission energy test reactor operated by the Atomic Energy Commission and a consortium of 17 southern electric utilities.

After just four years, the Southwest Experimental Fast Oxide Reactor went dark. It was acquired a few years later by the big university up the road 20 miles—totally decommissioned. University scientists hoped to use it for nuclear research, but the program failed to launch. The site remained sealed. Now the U.S. Department of Energy has offered money to help tear it down.

But first media — as well as hundreds of curious locals — were briefly allowed inside. 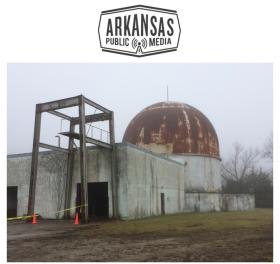 The Southwest Experimental Fast Oxide Reactor operated for only four years, but it produced plenty of heat as well as excess plutonium.  After SEFOR’s radioactive fuel and sodium coolant were removed in 1972, the University of Arkansas in Fayetteville licensed the reactor hoping but failing to establish a nuclear energy research program. University facilities managers have served as caretakers of the radioactive site ever since, at a cost of $50,000 a year.

Thirty years later, with federal funding, SEFOR will undergo final decommissioning and demolition. But first, as a courtesy to locals, the University of Arkansas hosted an open house, or in this case, an “open nuke.” 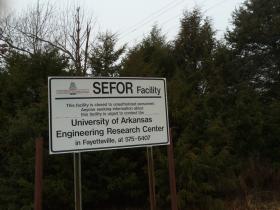 Few people have ever gotten a close look at SEFOR, located behind a security gate down a winding dirt road inside a dense cedar thicket. But on a cold misty afternoon Jan. 19, hundreds of people quietly walked under the nuclear plant's rusty white reactor dome. The University prepared for the open house by removing all hazardous debris from the tour route, opening doors and equipment bays to air the facility out. Such breezy openness felt disorienting.

Hundreds of curious residents waited at the front gate while I and other members of the news media toured first. All visitors had to put on protective gear — hard hats, goggles, and vests — as well as sign liability waivers, indemnifying authorities from exposure to dangers including psychological injury, disease, disfigurement or death. 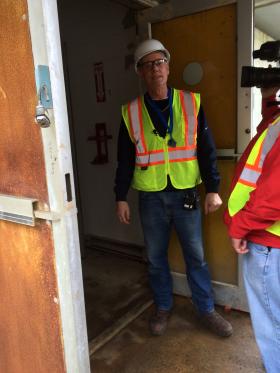 Dean Wheeler with EnergySolutions, a global nuclear hazardous waste company contracted by the University of Arkansas to decontaminate and dismantle SEFOR, guided us. We began in a concrete block operational support building, once occupied by nuclear power engineers and mechanics dressed in white coveralls and caps. We walked past bedrooms, showers and offices.

“They slept here,” Wheeler said. “It was almost like being on a ship.”

“You see that ring of gauges?” he says. “Those were position indicator gauges for the reflectors that would control the fission reaction.” 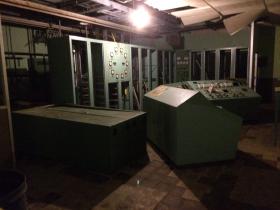 But rather than using enriched uranium, SEFOR's nuclear fission was triggered by experimental MOX fuel rods fabricated with uranium and plutonium dioxides, cooled with molten sodium, not cold water. One uranium fuel pellet the size of a dime contains the energy equivalent of a ton of coal, according to the Nuclear Energy Institute. Such potential generated the 1960s friendly promise that nuclear power would one day be “too cheap to meter.”

SEFOR’s 20-megawatt reactor did produce lots of heat to boil water to produce steam to power turbines for electricity but the test facility was never grid-tied. Produced steam was vented into the atmosphere. But at the dawn of the nuclear power industry, uranium enrichment for conventional cold water nuclear fission remained costly and uranium reserves scant, which gave rise to test breeder reactors like SEFOR.

Then, the discovery of additional uranium in places like Wyoming, Arizona and New Mexico, along with security concerns about plutonium proliferation, put an end to America's experimental nuclear fuel breeding program.

Dean Wheeler stepped through a heavy steel airlock — like a film set submarine or space ship — and ascended several flights of metal grate stairs, into the nuclear reactor containment building, beneath the iconic white dome. A viewing portal, once covered with thick leaded glass, revealed the reactor core, a deep room illuminated by an eerie green sodium light. 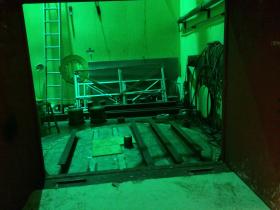 Standing in a room where humans split and contained radioactive elements as hot and dangerous as Earth’s molten core was unnerving. Dean Wheeler reiterated that all fissionable material was removed long ago.

“What’s left in here that’s radioactive is the steel that surrounded the fuel that’s become irradiated ,” he said, “and the hardware that's housed that fuel is irradiated.”

He motioned us towards the stairs. Lingering was discouraged.

Over the next 18 months, EnergySolution's 25-person crew will demolish SEFOR. The team is currently measuring and documenting the facility’s radiation hazards. Outer buildings will be dismantled first; any lead, PCBs and asbestos will be carefully removed. Even the ground, excavated three feet deep, will be hauled off and safely disposed of at out-of-state nuclear waste dumps.

“We are peeling back the onion if you will,” Wheeler says, “working our way into the reactor containment.”

The final phase will involve lifting the intact reactor vessel — and placing it into a radiation-proof shipping container for transport to the company’s nuclear waste site near in Salt Lake City.

SEFOR’s open nuke tours were time-limited to just 15 minutes, so after checking out the fuel core loading portal—and taking a close look at a radiation dosimeter necklace hanging round Dean Wheeler's neck--for assurance, the media exited through the nuclear materials loading bay. 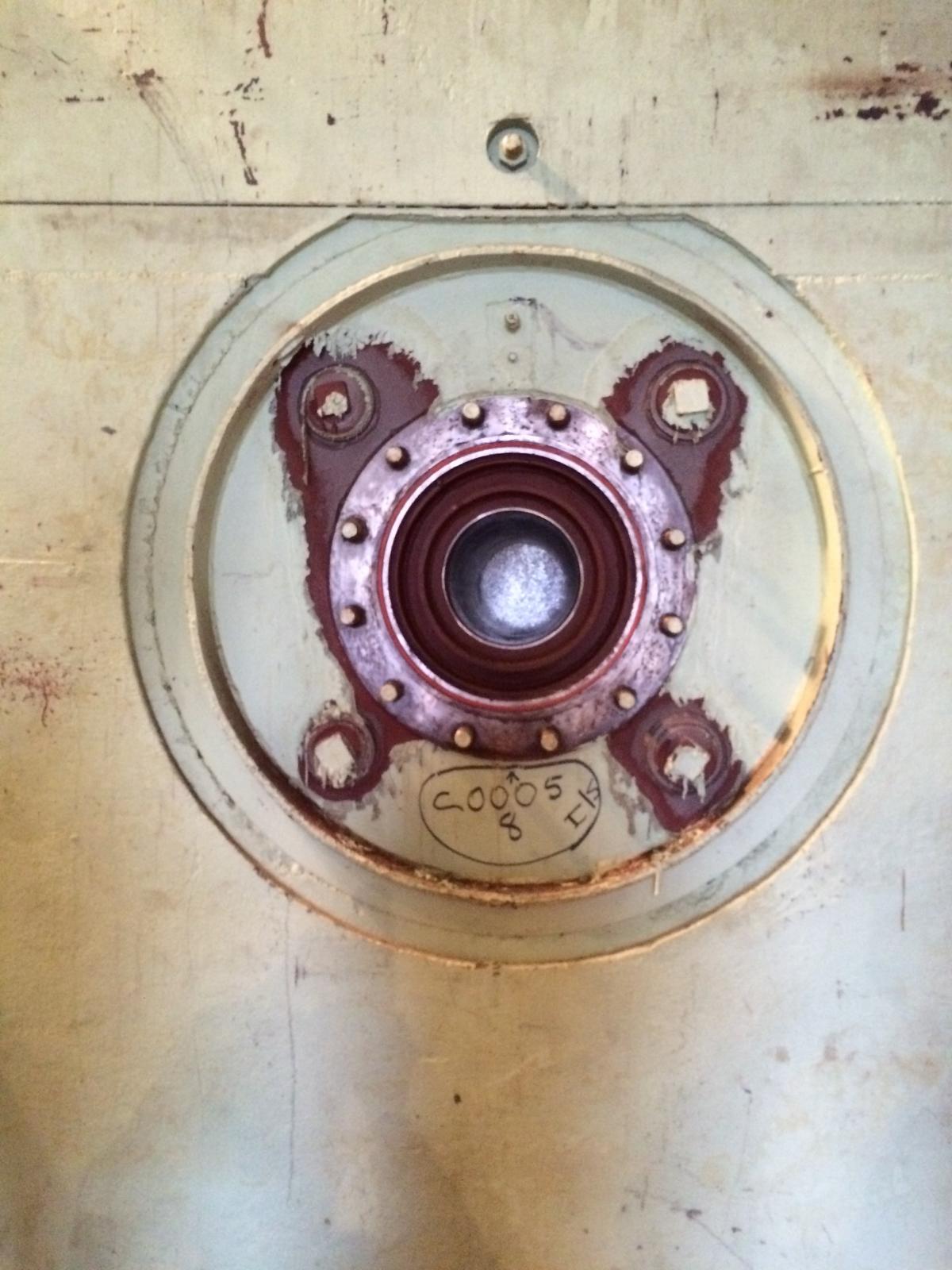 By the end of the day, 365 local pilgrims showed up at SEFOR's security gates and were allowed to walk down the winding forested road in groups of 20, to get a close and personal look inside the ghostly white nuke that has haunted their landscape all these years. Many more had to be turned away. 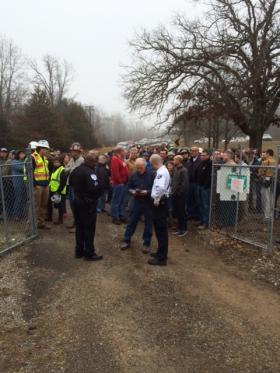 A box of musty 1960s informational SEFOR brochures were recently discovered inside the facility. The yellow and brown two sided guide addresses all sorts of questions like, “Are projects like SEFOR dangerous?"

Answer: “Absolutely not. It is impossible to create an atomic bomb type explosion in a nuclear reactor.”

The meltdowns at Three Mile Island, Chernobyl and Fukushima were still years away.

The brochure also asks: “What about radiation?"

Answer: “You would get more radiation from the operation of your television set than if you lived next door to the SEFOR site.”

A University official pointed out after the tour, the brochure's inacuracies. The official also provided assurances that no accidents or spills were ever documented at SEFOR. The reactor is located on Fall Creek, a tributary to Lee Creek--a  drinking water supply for the city of Fort Smith.

The University of Arkansas also states that the SEFOR cleanup is a kind of national pilot project, to pioneer efficient methods of deconstructing a nuke and rehabilitating the natural landscape.

And the total cost to dismantle SEFOR?  Nearly $2 million for planning, $10.5 million for outer facilities tear down, and an additional $16 million to remove the radioactive core. So far $12.5 million has been raised, thanks to Arkansas's Congressional Delegation and the U.S. Department of Energy. 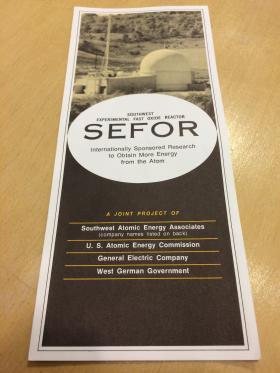 The Arkansas Department of Health Radioactive Materials Program will oversee final decommissioning of SEFOR to make sure no abnormal releases of radiation occur. A University of Arkansas team will also be on hand for support.

EnergySolutions is responsible for planning, deconstruction, decontamination, waste packaging, and shipping. The firm will also generate a post-cleanup radiation survey.

If certified free of radioactivity, reduced to what is referred to as "greenfield status," the 640-acre parcel may be sold by the University to the highest bidder, or maintained as a carbon sequestration forest.