How Pinnacle Mountain Got Its Name

Ask around in Central Arkansas and you will run into few people who are unfamiliar with Pinnacle Mountain, or simply, “Pinnacle,” as most locals call it. However, Pinnacle Mountain has not always carried that title.

When English botanist Thomas Nuttall was floating down the Arkansas River in 1819, the rocky peak came into view and he recorded it as “Mamelle” mountain in his book, A Journal of Travels into the Arkansas Territory During the Year 1819. Mamelle, which eventually became “Maumelle,” is the French term for breast, which Nuttall applied to the cone-shaped peak. This title influenced what is now the city of Maumelle, as well as Lake Maumelle and the Big and Little Maumelle Rivers.

The mountain’s name change began as trips to “that pinnacle” became a popular outing during the late 1800s and early 1900s. Trips to the mountain increased with the construction of the railroad in the 1890s, and even more so when automobile use became widespread and better roads were developed. The nickname became official soon after, and the rest is history.

Today, over 700 thousand visitors from all over the state come to the park to climb “that pinnacle” of Little Rock, Pinnacle Mountain. 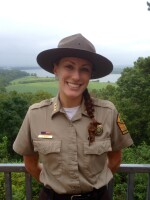