With a large mouth full of teeth, a slimy muscular body, and a reputation for having a voracious appetite, bowfin won't win the Miss Congeniality contest.

These primitive fish lived alongside dinosaurs. Today they lurk in Arkansas's lowland rivers, bayous and swamps. Bowfin are tenacious ambush predators and mainly hunt at night for other fish. Most people inadvertently catch bowfin while fishing for crappie or bass. They thrash and jump and their teeth often break the line.

Despite this "tough guy" reputation, male bowfin are doting parents. They spawn in the spring, and males turn a strange shade of lime green. He builds a circular nest where the female lays her eggs and then leaves. He aggressively guards the eggs and herds the young. 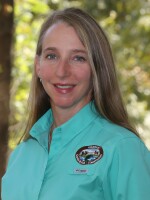