Seven years after a proposal was announced for a pedestrian and cycling trail linking Little Rock and Hot Springs, a key step toward creation of the Southwest Trail is underway. A virtual public hearing is taking place online through Aug. 26 allowing people to view the preferred alignment for the route, an interactive map, and offer comments on the project which has an estimated construction cost of $43 million.

The 60-mile trail was formally proposed in 2013, with much of it making use of former railroad beds. It would link smaller popular trails, including the Arkansas River Trail, and cross through parts of Pulaski, Saline, and Garland counties.

The Southwest Trail is expected to be extremely popular among locals and visitors, providing an economic boost to the surrounding areas. It would also pass near several historic locations.

"There will be a lot of markers along the trail that will highlight a whole variety of different things that walkers and bicyclists can see," said Wallace Smith with the engineering firm Garver, which is overseeing the design of the project.

"Both Hot Springs National Park and Little Rock Central High National Historic Site are very excited about the trail,” he said, adding that it will broaden awareness and bring more people to the parks. "We’ve been working with both park sites on how to best tie in the trail and make use of these wonderful spots in Arkansas.”

A midway point for the trail is a 129-year-old bridge over the Saline River in Benton, which is the second-oldest bridge still standing in Arkansas. The Old River Bridge is noteworthy for its appearance in the 1996 Academy Award-nominated film Sling Blade, which was set in Arkansas and stars Hot Springs-native Billy Bob Thornton.

In 2015, a $500,000 grant was awarded to begin renovations of the mostly rusted metal frame for its use in the trail.

In Little Rock, it’s hoped that several miles of an abandoned railroad right-of-way can be acquired, including an overpass on West 7th Street. The rails once used by the Rock Island Railroad were taken up in the years after the bankrupt company was shut down in 1980.

Underneath the overpass is a steadily growing mural first painted in 2017 featuring themes of peace, civil rights, and the Black Lives Matter movement. In May, a portrait of George Floyd, who was killed by police in Minneapolis, was added alongside people like Martin Luther King Jr. and the Little Rock Nine.

Its proximity to Central High School – scene of the 1957 desegregation crisis – could make it an additional attraction for visitors who travel to Little Rock to see the school. Today the property is owned by Union Pacific, which runs trains on an adjacent overpass.

While the former Rock Island right-of-way is currently overgrown, it could still be of value to Union Pacific if anything happens to its adjacent tracks or it later wants to expand the number of tracks through the area.

To the north, the preferred alignment would have the Southwest Trail going around Union Station and linking to the Arkansas River Trail. To the south, existing bridges would allow the trail go run under Interstate 630, city streets and eventually curve around the Arkansas State Fairgrounds before heading toward Saline County.

Smith said there have been preliminary discussions with Union Pacific, but that right-of-way acquisition efforts would take place after the public comment period and completion of an environmental assessment.

"That’s a process that will pick up speed as we conclude the EA," Smith said.

Union Pacific spokeswoman Raquel Espinoza said in an email that the railroad "has had general discussions related to the Southwest Trail through the years, but it has been a while."

During the environmental assessment Smith said every facet of project is being examined.

“That’s where we take and consider the entire 60 miles and look at potential various alignments, and then hopefully try to settle on a preferred alignment, and then document all of the potential environmental impacts from that. Does the alignment go through wetlands, or does it go through an endangered species area, things like that,” Smith said.

In southwest Little Rock, he said five miles of former Rock Island right-of-way is now owned and dedicated for the Southwest trail. In Benton, he says much of the route would run parallel to U.S. 70, with 14 feet of embankment having been established on the south side of the highway. The trail would also use a former Missouri Pacific Railroad right-of-way.

Backers of the project had hoped to hold public hearings in all three counties involved, but because of the pandemic, it was shifted to six-week online virtual hearing, which began on July 12. 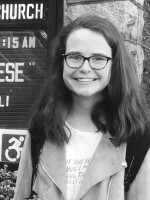 Phoebe Sanders
Phoebe Sanders was an intern for KUAR's news department from December 2019 through August 2020. She is graduate in 2021 from Episcopal Collegiate School, and hopes to study political science and religious studies in college.
See stories by Phoebe Sanders
From NPR