Donnie Saxton said his son Parker’s depression returned in May 2021 when the Arkansas Legislature was about to pass a bill that would become Act 626.

“He said, ‘I feel like we’ve done all this for nothing,’” referring to Parker’s gender transition process so far, Donnie Saxton said.

Act 626 bans gender-affirming medical care for transgender minors and is currently on trial in federal court. Two physicians and four families of transgender teenagers, including the Saxtons, filed suit against the law shortly after it passed.

Parker Saxton came out to his father in late 2019. He was finishing his sophomore year of high school and was scheduled to receive his first testosterone treatment when Act 626 passed the Legislature. It soon became law after the Legislature overrode Gov. Asa Hutchinson’s veto.

The law, known as the Save Adolescents From Experimentation (SAFE) Act, prohibits physicians from providing “gender transition” treatments like hormones, puberty blockers and surgeries to minors.

Donnie Saxton said he slept on the couch near his son’s bedroom because he was worried for Parker’s safety due to his “withdrawn” and “broken” demeanor.

U.S. District Judge James Moody, who is hearing the case against Act 626, placed an injunction on the law in July 2021 that was upheld in August by a three-judge panel of the 8th U.S. Circuit Court of Appeals.

Parker’s regularly scheduled hormone treatments have gone on as planned, and he is “a new person” as a result, his father said.

“He’s a complete turnaround of the broken, depressed, anxious shell that he was before testosterone,” Donnie Saxton said.

Attorneys from the American Civil Liberties Union are representing the plaintiffs. The defense did not have questions for the plaintiffs after they answered the ACLU attorneys’ questions on Tuesday.

The trial was originally scheduled to last two weeks, but Moody said Monday that he could hear the case until Friday and would continue it in December if need be.

ACLU attorney Chase Strangio said Tuesday that the plaintiffs’ case will close Wednesday afternoon or Thursday morning. Dylan Jacobs of the state Attorney General’s office said not all of the defense’s witnesses will be available this week.

Similar laws restricting access to gender-affirming care in three other states — Alabama, Arizona and Texas — also are on hold after judges blocked enforcement.

A Kaiser Family Foundation analysis of the legal landscape published in June noted that in addition to the four states that have adopted similar bans on gender-affirming care for youth, 15 others were considering 25 pieces of legislation with similar aims.

Medical groups, including the American Medical Association and American Psychiatric Association, have lobbied against Act 626, saying the banned treatments are safe and that medical decisions should remain in the hands of doctors and their patients.

Four medical professionals who have treated transgender minors echoed these statements on the witness stand Monday and Tuesday. All four are based outside Arkansas, as the defense attorneys pointed out, but all four said there are nationally-recognized guidelines and standards of care for transgender youth that healthcare providers in Arkansas should be following.

The defense attorneys with Attorney General Leslie Rutledge’s office asked witnesses if people who transition young eventually regret transitioning or come to identify with their assigned sex at birth, effectively “detransitioning” or hoping to do so.

Dr. Jack Turban, a San Francisco-based psychiatrist with a research focus on LGBTQ health, said “detransitioning” is a “broad heterogeneous term” that usually means discontinuing gender-affirming treatment. People might do this for several reasons — losing health insurance, experiencing harassment or being satisfied with the changes their bodies have experienced so far — and these reasons do not necessarily mean they no longer consider themselves transgender, Turban said.

The defense has also brought up “rapid on-set gender dysphoria,” or the idea that adolescents can experience gender dysphoria suddenly as a result of peer pressure or “social contagion.” Turban said this is not accurate and the study that coined the term had many flaws.

“We generally see that from parents’ perspectives — a young person’s trans identity is a surprise and that announcement seems to come all of a sudden or rapidly,” he said. “But when you talk to the young people, they usually say that they have been thinking about this often for years, and they’re really afraid of their parents’ reactions.”

Sabrina Jennen “had a very visible appearance of joy on her face” when she came out to her parents the day after her 15th birthday, her father Aaron Jennen said.

He and his wife, Lacey, have supported their daughter’s transition, and after much research and multiple doctors’ appointments, they allowed Sabrina to receive gender-affirming testosterone blockers and estrogen in January 2021. The informed consent process aligned with other medical decisions they have made for their three children, Aaron Jennen said.

Sabrina is now 17. She used to hate having her picture taken, but she now enjoys taking selfies and drawing self-portraits, her father said.

Donnie Saxton said healthcare providers also made sure he and his son were fully informed about Parker’s hormone therapies before he received them. Parker is aware that testosterone can impair fertility in transgender males, but agreed to the treatment because “he believes there’s lots of ways to make a family,” his father said.

Neither Sabrina nor Parker received puberty blockers, or hormones that pause or delay puberty in adolescents, because they came out as transgender after puberty.

Sabrina, Parker and their respective parents and siblings have all lived in Arkansas their entire lives. Both families would have to leave the state to get the medical care that would keep the teenagers’ mental health struggles from returning if Act 626 goes into effect, Aaron Jennen and Donnie Saxton both said.

Donnie Saxton helps his parents run a small business in Vilonia, and said he would struggle to financially support Parker and his younger siblings if they had to move.

Aaron Jennen said it’s “not an option” for Sabrina to stop receiving hormone treatments, but traveling or moving away from their extended family in Northwest Arkansas would be a financial and emotional burden. Losing access to gender-affirming care in Sabrina’s home state would say something “about what that means the state thinks about her and who she is and who she wants to be,” her father said.

“Hypothetically, if she were [to stop treatment], I worry about her withdrawing back into the person she was before she started it, a person who was unhappy, who said things to her mother and me like, ‘What’s the point of life?’ and things like, ‘I don’t see a future for myself,’” Aaron Jennen said, becoming emotional.

Both Sabrina and Parker have developed the confidence to participate in activities they would not have considered before transitioning, their fathers said. Sabrina is a high school senior and applied to be a candidate for homecoming queen.

Parker volunteered and was chosen to read the names of fallen 9/11 first responders at a memorial event this year.

“It was a pretty good crowd, and he was really confident,” Donnie Saxton said. “His voice was strong. He’s my hero.” 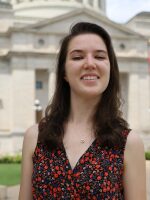