Five months after the Arkansas Medical Marijuana Act, a voter-approved ballot initiative, officially took effect in early November of 2016, handgun carrying laws greatly expanded in Arkansas as well. But gun owners who register as medical marijuana patients are federally prohibited from purchasing or even owning a gun.

On a recent Monday morning, a lone silver-haired man practices shooting his semi-automatic handgun inside a Tontitown gun range. He slowly fires off a round of bullets, stops to study his target, a paper human silhouette in the distance riddled with holes, reloads and takes aim again. 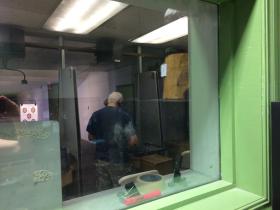 But if this licensed gun-owner is a registered Arkansas medical marijuana patient and aims to to purchase a new gun for shooting practice from a licensed dealer, for example, David Rose Gun shop in Farmington?  Operator Cheryl Rose says he will be in big trouble.

“The FBI will know you committed a perjured felony," she says. "You don’t want to do that.”

Rose is referring to a federal law, which bars medical marijuana patients from purchasing a gun, or even owning one.  Violators face up to 10 years in prison, and up to $250,000 in fines.

Licensed U.S. gun dealers are required by law to conduct federal background checks, asking every customer to fill out a federal “Firearms Transaction Records.” On that form, applicants are required to answer yes or no to the question,  "Are you an unlawful user of, or addicted to, marijuana or any depressant, stimulant, narcotic drug, or any other controlled substance?"

Marijuana, along with heroin, LSD, methaqualone, peyote, and ecstacy remain outlawed in the U.S. The Bureau of Alcohol, Tobacco and Firearms or ATF, classifies such drugs as having no currently accepted medical use, and a high potential for abuse. Regina Milledge-Brown is industry operations investigator and program manager in ATF's public affairs division.

"Therefore, any person who uses or is addicted to marijuana, regardless of whether his or her state has passed legislation authorizing marijuana use for medicinal purposes," she says, "is an unlawful user of or addicted to a controlled substance, and is prohibited by Federal law from possessing firearms or ammunition."

Robert Brech, general counsel for the Arkansas Department of Health, says he’s been warning the public about the medical marijuana gun prohibition.

“I’ve been invited to talk to a number of groups around the state about medical marijuana," he says, "and I always bring it up and there are always questions. But it's clear under federal law that it’s a Schedule 1 substance and illegal. So it’s not something I would recommend, anyone getting a registration card if they plan to purchase or use firearms.”

Gun ownership among U.S. medical marijuana users had its first legal test case in 2016, when a Nevada patient, barred by a dealer from purchasing a gun, challenged the federal statute before the U.S. 9th Circuit Court of Appeals. The judge ruled the ban does not violate the Second Amendment. 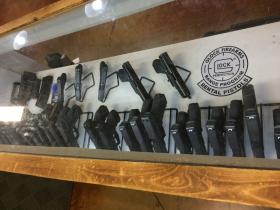 According to Giffords Law Center, which advocates for stricter gun control, nearly a quarter of all gun sales were made through unlicensed sales. More than 60 gun shows will take place in Arkansas in 2018, where more private sales could expand given the pot prohibition.

“It could. But they also know that if they are in possession of it, they are in violation of the law. Gun owners, over the whole, follow the law.”

The National Rifle Association has yet to take a position on the matter. Currently 17 states require universal background checks on all gun purchases. Arkansas does not.