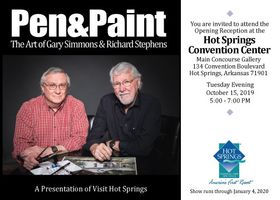 Two of Arkansas’s Most Accomplished Artists, Both Residents Of Hot Springs, to Display Art at Convention Center in October (Illustrations: Eureka Springs Chef by Richard Stephens and Changing of the Guard by Gary Simmons) HOT SPRINGS NATIONAL PARK, Arkansas — Two of Arkansas’s most accomplished artists, both residents of Hot Springs, will be featured in a joint exhibit at the Hot Springs Convention Center beginning October 15. Gary Simmons and Richard Stephens, both of them recipients of national recognition and who are so closely associated artistically and personally that they both will answer to the name “Richard Simmons,” will display their artworks in the Convention Center space used earlier for an exhibit by Hot Springs artist Longhua Xu, according to Mary Zunick, cultural affairs manager for Visit Hot Springs. The exhibit is PEN AND PAINT: The Art of Gary Simmons and Richard Stephens. “Gary and Richard wonderfully represent the highly regarded Hot Springs arts community as artists who are known nationwide for the quality and imagination of their work,” Zunick said. “Their work will remain on display until January 3, and the exhibit is free and open to the public during business hours at the Convention Center.” “Our Convention Center already has a widely known reputation for its permanent display of dozens of artworks that are enjoyed by our residents as well as those who attend meetings and events in the Center and Bank OZK Arena,” she said. Simmons and Stephens met in 1974. Forty-five years of creativity and friendship have linked the names of Stephens and Simmons into one entity for much of Hot Springs. An Illinois hippie and an Arkansas straight arrow found a common playing field in their love of art. In 1974 they began joint venturing art jobs as illustrator and designer until 1983 when they incorporated as Stephens and Simmons Design Studio. In 1989 they returned to their individual careers but maintained a deep respect for their friendship. Richard continued his design business and Gary began teaching pen workshops nationally for the pen manufacturer Rapidograph Koh-I-Noor until 1991 when he joined the Henderson State University art faculty, retiring as professor emeritus in 2013. Since the early 1990s Richard has become increasingly involved in watercolor to the point that he now teaches workshops full-time all over the country. Their professional journeys reflect their association, but their friendship speaks to their characters. From the beginning they found some ember in common that sparked a blazing passion for the art that has come to define their relationship. That passion was a confluence of very different backgrounds. Richard’s education in art and his professional experience in commercial art were essential ingredients to Gary’s growth into the art world. Gary’s university research and writing experience, coupled with his drawing skills helped broaden Richard’s world and his commercial work. They worked together in graphic design for 15 years, doing everything from logo design to major promotional campaigns such as the current Garland County Library’s new building, to local and regional business promotions, and local government and National Park issues. The art in this show represents who Richard and Gary have become as individual artists outside of their commercial and academic pasts. It’s important to recognize how mutually influential they have been in their personal developments. As early as 1976 they and Thad Flenniken were instrumental in starting a life-drawing cooperative that exists to this day, still meeting weekly, and still providing a shared experience in creating art. The sharing between Richard and Gary extends to mutual critiques and instruction, team-teaching, judging shows, working on community projects, consulting, public speaking, and working with young artists. Recently they ambled the streets of Paris together, soaking up the art and adding a new